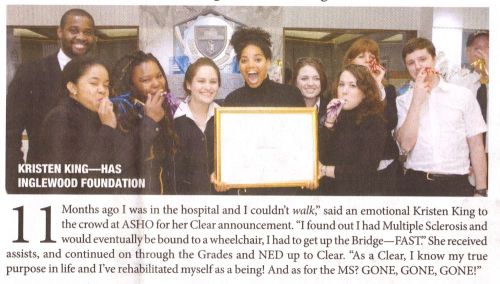 “11 Months ago I was in the hospital and I couldn’t walk” said an emotional Kristen King to the crowd at ASHO for her Clear announcement. “I found out I had Multiple Sclerosis and would eventually be bound to a wheelchair, I had to get up the Bridge—FAST.” She received assists, and continued on through the Grades and NED up to Clear. “As a Clear, I know my true purpose in life and I’ve rehabilitated myself as a being! And as for the MS? GONE, GONE, GONE!” Kristen King – HAS – Inglewood Foundation

This testimonial was in a recent issue of “The Auditor” – the newspaper that ASHO (American Saint Hill Org) mails out every few months or so. I was rather perplexed (not knowing much about MS) until some helpful Bunkerites over at The Underground Bunker explained it to me when I posted this image over there. According to them it’s not uncommon for MS to go into remission temporarily so that’s most likely what happened here. However regardless of whatever Scientology woo she throws at it the MS will be back (excepting for medical treatment of course).

The worst part is I can guarantee that when the MS symptoms flare up she will be told she “pulled it in” due to overts (unethical acts in Scientologese) or some such nonsense. She will also be told that she must immediately purchase expensive higher level auditing to go up the OT levels to fix this. Staff members in Scientology orgs sometimes get a limited amount of free auditing depending on various circumstances but otherwise only get a 50% discount (off of the full non-IAS discounted rates).

Additionally once she is so sick that she can no longer produce on post she will be offloaded and utterly abandoned by the Church of Scientology. Sick people who cannot work are considered degraded beings in Scientology. To add insult to injury Scientology refuses to provide health benefits to their workers nor do they pay into Social Security.

I feel for Kristen, I really do.

This entry was posted in Dox, This Is Why (News) and tagged ASHO, MS, Multiple Sclerosis, practicing medicine without license, Scientology, The Auditor. Bookmark the permalink.